Energy storage systems have been gaining more public attention, and they will qualify for a dedicated 30% federal tax credit starting from 2023. Batteries can perform several functions that are useful for building owners, but even better results are possible when they are used along with a commercial solar array. Here we will discuss why a combined solar PV + battery system makes sense from an investment standpoint.

Save on power bills and improve your building’s energy resilience with a solar PV + energy storage system. 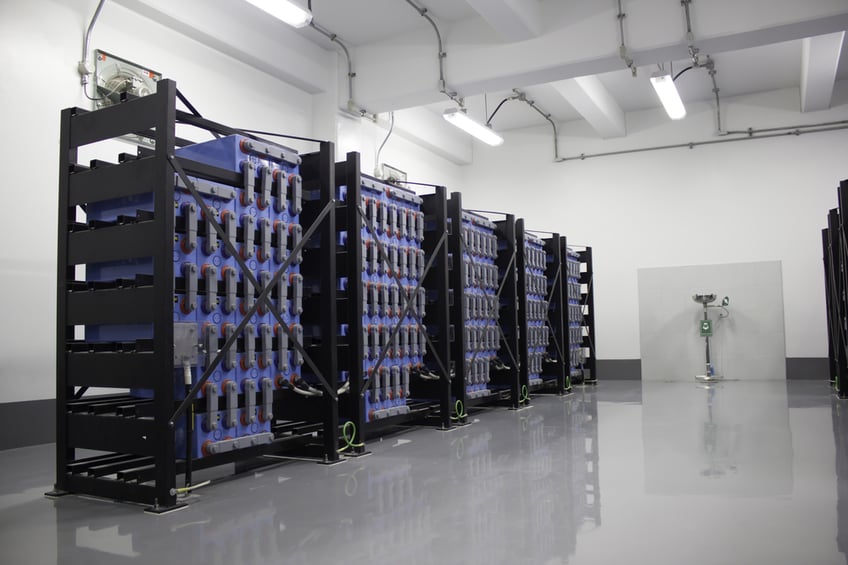 A battery system can be used as a backup power supply during blackouts and other emergencies, but it can accomplish additional functions that lower your electricity bills. In general, there are two main ways in which batteries can lower your energy costs:

Energy arbitrage consists of storing electricity during off-peak hours, when kilowatt-hour prices are low, and using it during peak demand hours where kWh prices are high. This way, you save the price difference between peak and off-peak electricity. However, this strategy is only possible for building owners with time-of-use tariffs; if electricity prices remain constant all day long, energy arbitrage is not possible.

Peak shaving consists of using a battery to cover your building’s kilowatt consumption peaks, reducing the net demand measured by the power meter. Most commercial and industrial tariffs include capacity charges, which means you pay not only for energy consumption, but also for maximum demand. By reducing the peak kilowatts measured by your power meter, you can reduce capacity charges. This means your overall electricity bill can be lowered, even if total energy consumption stays the same.

Stand-alone batteries can perform both of these functions, but there is one limitation: you must rely on the power grid to charge the battery system. US electricity prices have been rising sharply in 2022, and this trend can be expected to continue in 2023 as long as natural gas demand remains high. A battery array that gets all its charge from the local grid will tend to have high operating costs, and this will extend your payback period.

When a building battery system is charged with a commercial solar array, its operating costs are drastically reduced. According to the latest data from the US Energy Information Administration, the average commercial tariff is now 13.45 cents/kWh. For comparison, a commercial solar array can reach an LCOE (levelized cost of electricity) of less than 8 cents/kWh. Grid electricity is also affected by inflation, while a solar energy system has predictable ownership costs throughout its service life.

the financial performance of each renewable energy project must be analyzed individually. However, when comparing a stand-alone battery and a solar PV + battery system, the addition of solar panels generally brings the following results:

The cost difference between grid electricity and onsite solar power is even larger in New York State, where the average commercial kWh price now exceeds 20 cents/kWh. If your commercial building is located in NYC, a solar + battery system can also help you avoid emission penalties under Local Law 97 of 2019.

LL97 of 2019 assigns an emissions factor of 0.000288962 tCO2-eq per kWh when using grid electricity, while onsite solar power has zero emissions. A stand-alone battery does not reduce your carbon footprint since all its charge comes from the grid, even if power bills are reduced. On the other hand, all the electricity provided by a commercial solar PV + battery system is emissions-free.

Thanks to the Inflation Reduction Act, stand-alone battery systems get a 30% federal tax credit starting from 2023. However, a solar + battery system also gets 30% of the PV system cost as a tax credit, and it qualifies for other incentives that are exclusive for solar panels . This includes the NY-Sun Megawatt Block Programwhich offers up to $1,200 per kW for commercial solar systems in the Con Edison region, and up to $350 per kW for systems in the upstate New York region.

In general, a solar PV + battery system will be a better investment than a stand-alone battery, considering its lower operating costs and the potential to qualify for more financial incentives. Stand-alone batteries are useful for backup power, energy arbitrage and peak shaving; Unfortunately, their dependence on grid electricity drives up operating costs.

3T Bikes will develop into the unique bike producer for BMW

Attractive Design Concepts to Rework Your Eating Room, No Matter Your Model