Performance wagons used to be the de facto do-it-all cars until luxury marques noticed the sales potential of adding big and powerful engines to their crossovers and SUVs. The X5 has 617 hp on tap in its most potent configuration, not to mention a massive 553 pound-feet (750 Newton-meters) of torque. BMW has refrained from going above the Competition model with a CS version, let alone a CSL, but tuners will happily extract more oomph from the brawny V8.

Manhart is on the list of aftermarket specialists that’ll happily tinker with the twin-turbo 4.4-liter engine and unlock levels of power we usually associate with fully fledged supercars. In its highest state of factory tune, the S63 makes 627 hp in the now-defunct M5 CS, but it’s been massaged here to produce an astounding 730 hp. Torque is also substantially up, reaching a mountain-moving 664 lb-ft (900 Nm). 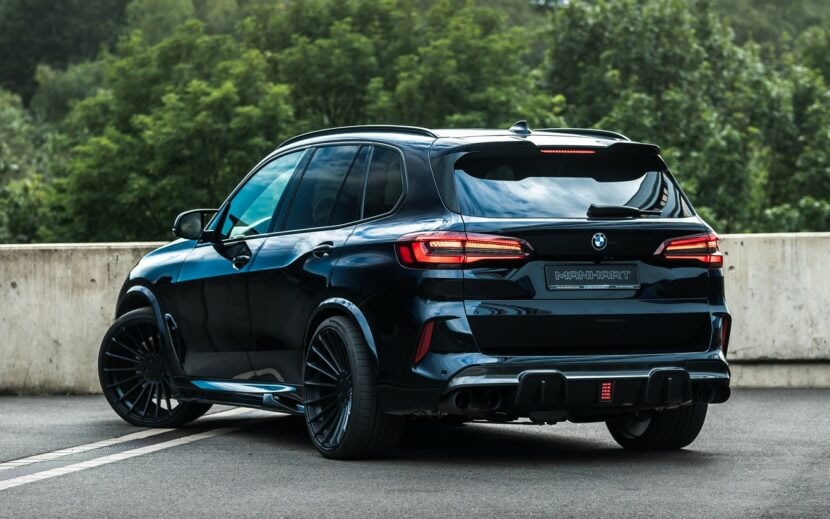 There’s more to this X5 M Competition than an upgraded engine as the high-performance SUV has also received a vented hood with an exposed carbon fiber finish. The beefy luxobarge has been brought closer to the road courtesy of height-adjustable H&R springs and it now rides on massive 23-inch Hamann wheels with chunky 315/25 ZR23 tires.

The list of mods also includes Manhart’s own stainless steel quad exhaust with 100-mm tips and valve control. Optionally, the gasoline particulate filter can be deleted for a more aggressive soundtrack but exclusively in markets where you’re allowed to take out the OPF. The hood’s GTR-styled air vents are not the only visual tweak as the X5 M Competition has also received a front spoiler lip and two-piece side skirts made from carbon fiber. At the back, the menacing diffuser has a centrally mounted rectangular fog light akin to an F1 car’s rain light.

As for the tastefully configured interior, it has remained nearly stock, save for custom gearshift paddles and floor mats carrying Manhart’s signature.

Able to Develop Your Architectural Enterprise? Take These Important Steps

How To Select The Proper Pool Builder