We bring you the first live photos of the new BMW 7 Series and the i7 electric sedan. The duo was introduced to the press last week at an event in Manhattan and we can now share our live photos. There were two models on site: a Frozen Black BMW 760i xDrive with the M Sport Package and a BMW i7 xDrive60.

The absolute flagship in Bavaria’s lineup offers the so-called Power of Choice: gasoline, diesel, plug-in hybrid, and purely electric. They all ride on the same CLAR platform and largely share the same design inside and out. Let’s address the elephant in the room – split headlights. Yes, the new BMW 7 Series is next in line to get the unconventional layout after the X7 facelift.

The BMW i7 xDrive60 is powered by dual electric motors, made using no rare earth materials at all. Maximum power output is 536 horsepower and 549 lb-ft of torque, which ironically (or not so ironically) gives it the same horsepower as the BMW 760i. According to BMW, 0-60 mph happens in 4.5 seconds and the i7 has a top speed of 149 mph.

Those two electric motors, which provide torque-vectoring all-wheel drive, get their energy from a 101.7 kWh (usable) battery pack, which is said to be capable of up to 300 miles of range. That range figure is a BMW-estimated figure, based on EPA testing procedures. 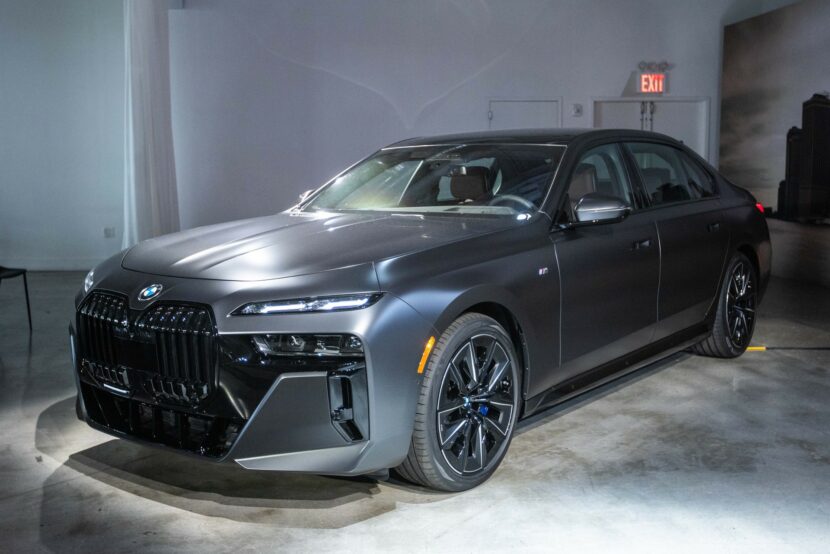 The first M Performance plug-in hybrid from BMW will go by the name of M760e xDrive. This one too will have an inline-six and an e-motor, but dialed to 571 hp (420 kW) and 800 Nm (590 lb-ft). 4.3 seconds is all that’s going to take to cover the sprint, en route to 155 mph (250 km/h). With the battery pack fully charged, it’s going to cover up to 52 miles (84 kilometers) running solely on electric juice. Both PHEVs share a battery with a usable capacity of 18.7 kWh. All versions equipped with a combustion engine, be they PHEV or not, come fitted with an eight-speed automatic transmission.

You can catch al the BMW 7 Series coverage here!