This is not our first “First Drive” of the 2022 Hyundai Tucson, but it is our first time behind the wheel of the plug-in hybrid version, which arrived a little later than the naturally aspirated 2.5-liter and hybrid 1.6-liter turbo models, both of which we’ve driven extensively. Our verdict there was pretty firm: If you want a new Tucson, the hybrid is the one to buy as the 2.5-liter gas-only four-cylinder is quite underwhelming. (Learn the difference between hybrids and plug-in hybrids here).

But if the hybrid is potent at 226 horsepower, the plug-in is downright punchy at 261 thanks to its larger electric motor (90 hp in the PHEV vs. 59 hp in the HEV). Both hybrids make 258 pound-feet of total system torque. An output of 261 horses would normally be more than enough for a compact crossover like the Tucson, but since it’s a PHEV, that power comes with a penalty that must be made up for. The bigger motor and substantially larger 13.8 kWh battery pack combine for a hefty 366 extra pounds when comparing a hybrid SEL to the PHEV (3,715 vs. 4,081 lbs). Spring for a Limited like our test model and you’re looking at a 4,235-pound curb weight. 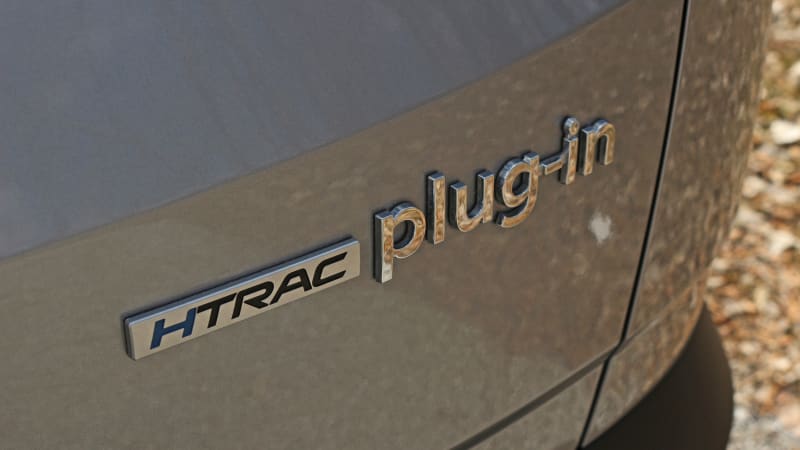 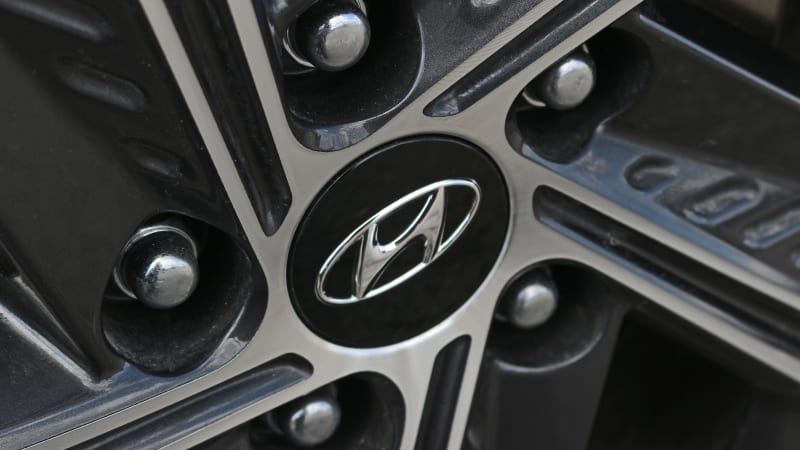 That brings us to the proverbial elephant in the room: the Toyota RAV4 Prime plug-in hybrid. Not only does Il Primo pack 302 horsepower, but it weighs roughly the same as the Tucson (4,235 for its SE trim, 4,300 for the XSE). It also offers nearly 30% more electric-only range (42 miles to the Tucson’s 33) and better all-around fuel economy (36 mpg combined to the Tucson’s 35, though that’s a negligible difference). This for two cars which, on paper at least, are virtually the same exact size.

On the road, our Limited tester felt every bit of its hefty curb weight. While 261 horsepower is more than adequate for day-to-day, it’s not going to wow your friends during a ride-along the way some more potent PHEVs will. The instant torque from the electric motor helps off the line, but that does no good when it comes time to turn or stop. The Tucson PHEV also lacks the sharper (note that we didn’t say “sharp”) suspension tuning of the Prime, which is exclusively offered in the RAV4’s sporty SE and XSE trim levels. Both Tucson hybrid variants were engineered with a system that loops in some electric regen for a mildly enhanced take on brake-based torque vectoring, but it won’t make the Tucson corner any flatter or brake any quicker.

Fortunately, the PHEV takes after the standard HEV, which means it’s far more pleasant to drive than models equipped with the 2.5-liter base engine. The available drive modes work as expected, with “Sport” prioritizing off-the-line grunt and quick passing power. Having a conventional six-speed automatic rather than the CVTs typically found in hybrids helps the PHEV feel like a normal car that just happens to be blessed with additional grunt. Only when put in EV mode does the Tucson really give off the vibes of a non-traditional SUV. 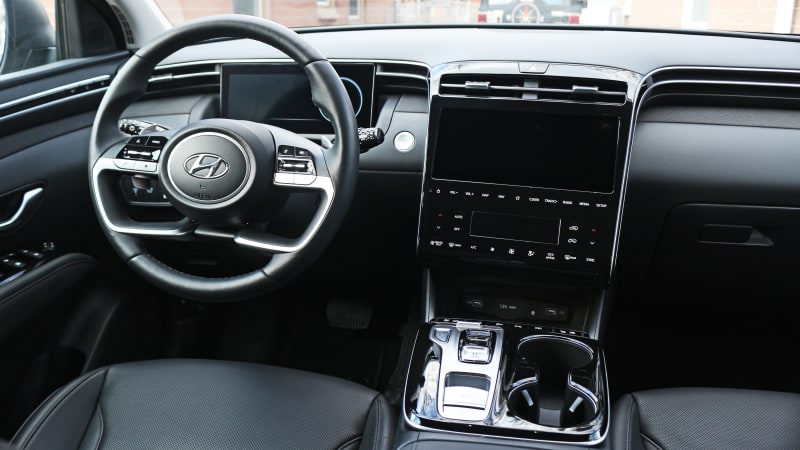 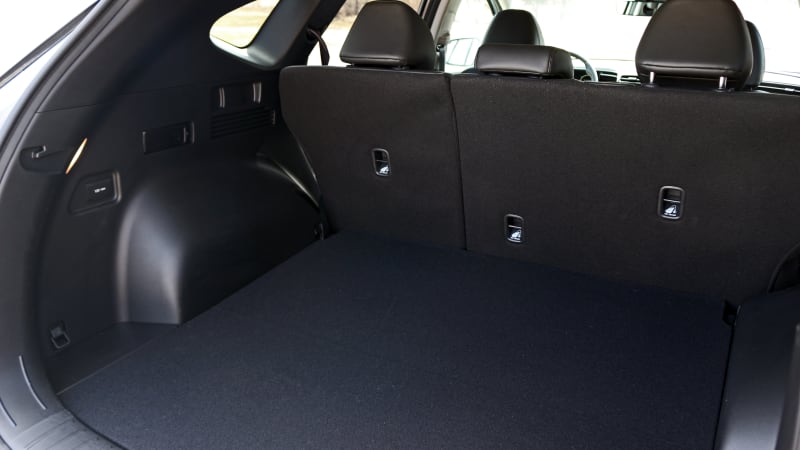 “Sport” mode is the sweet spot if you like that EV punch, but it’ll cost you in overall range, especially if you’re doing a lot of driving at steady speeds and only need the torque for passing, in which case you ‘ll run the battery down pretty quickly. Remember, electrified vehicles really like stop-and-go driving for a reason: there’s constant opportunity for regenerative braking to convert momentum into electricity and refill the battery. If you never brake, there’s no new electricity.

Hyundai makes it pretty easy to toggle through the PHEV’s available operating modes. The leading edge of the center console has a button to switch between EV and HEV operation, plus an up/down drive mode selector toggle and a separate button to lock the all-wheel-drive system into a fixed front/rear power distribution for tricky low-speed scenarios (it will default back to automatic power distribution above 40 mph whether you lock it or not). You won’t find anything like this in the RAV4 Prime, which utilizes a system with no physical connection between the front and rear axles. The rear axle is powered by an electric motor only.

Mechanically, these systems are very different, but in the real world there’s little appreciable difference in how they behave. Both are on demand, meaning power is only sent to the rear axle when the car’s brain decides it’s needed. The RAV4 Prime has electric motors in the front and rear, enabling AWD even in EV-only mode. The Tucson’s electric motor is integrated with the transmission so it can send juice wherever the transmission can — meaning all four wheels. 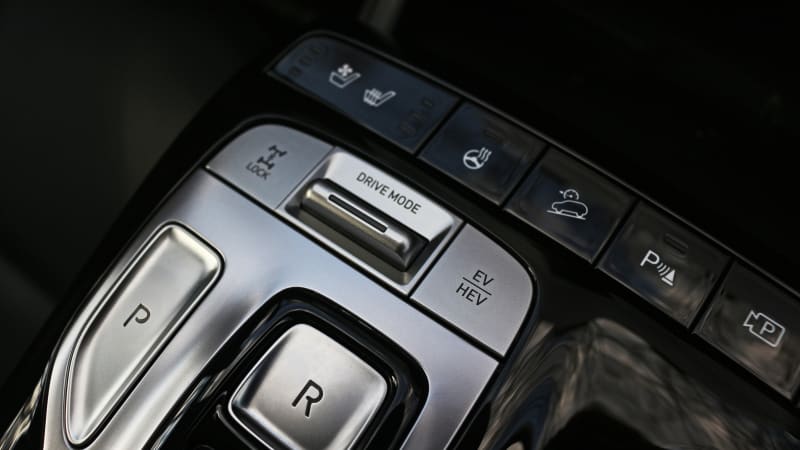 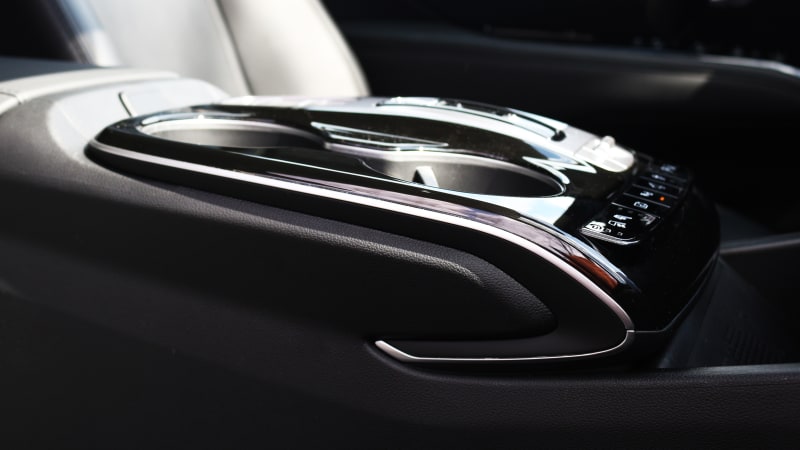 We noted above that the transmission really helps the Tucson PHEV feel conventional, and the interior leans into that theme. Apart from the items we mentioned above, there’s really nothing in the Tucson’s cabin that screams “Plug-in hybrid Earth saver!” There’s no in-your-face eco-themed detailing or plants growing on the dash. It’s just a Tucson, complete with the same infotainment system we’ve previously evaluated. Still no knobs, though.

Since plug-ins are still rare in this segment, it’s hard to fully contextualize the Tucson’s positioning. It’s not as fast, as fun to drive nor as capable of an electric vehicle as the Toyota RAV4. It tows a little less too — 2,000 pounds to the Prime’s 2,500. At the same time, it’s not as expensive. At the time of writing, the gap is about $5,000 (and could be even more considering dealer markups). Base for base, the Tucson gives you about 85% of the RAV4’s performance for about 85% of its price. The only category where that doesn’t hold up is in ultimate EV range; the Tucson’s dropoff there is closer to 30% than 15%.

It’s easy then to think of the Tucson as a scaled-back version of Toyota’s formula — and one we could live with. If the Tucson were more expensive or less capable, it would be easy to call the RAV4 Prime the uncontested winner. But since their prices scale proportionately, it’s really a matter of how much PHEV you want (or feel comfortable paying for).